← Oh, My Giddy Aunt!
What Every Reader Wants →

The New Romantics 4 write romance in its many forms . . . romantic adventure/suspense, romantic comedy, historical romance and dark romance with a soft centre. It being Valentine’s Day, we thought we’d share the moment when our hero and heroines experience the coup de foudre which will change their lives . . . forever.

Read our extracts and let tell us . . . when did you know that you’d met the love of your life?

‘Take care of my heart, I’ve left it with you.’  Edward Cullen

True Love? Romance? Ha! Rare as hen’s teeth in England after the First World War. After a trip to Texas, (The 20’s Girl), Gerardina Chiledexter is sure she’s had her one and only glimpse of both.

Back home, she confides in her friend, Prim:

‘Well …’ Gerry  sighed ‘… what if I have? Nothing happened.’ A few lovely moments of closeness and understanding, a frisson of pleasure. Nothing more. ‘It’s the land that Coop loves, the Circle-O.’

Fallen? Gerry was thinking. Is that like casting yourself over a cliff? Out of control, tumbling, floating through air? How do you get back, then? Can a person ever recover?

If only he hadn’t kissed her.

She could have stayed as she was, a frustrated spinster, in her narrow monk’s bed. Like Prim and most other women here. All those slowly breaking hearts, under buttoned-up layers of woolly cardigans.

Must stop thinking about it, must, must. Such a bad idea. But thoughts kept running away, out of control. She’d forget, eventually, of course she would.

‘Mmmn, yes,’ she imagined herself saying, eons later, ‘of course. I remember it now. There was someone once. That man, the man with no last name. Wrong time, wrong person.’

How long would it take to reach that stage, that blessed blur of not remembering? Until then, whenever the urge to think of him came over her – his touch, his mouth, that kiss – she’d have to lie down and wait, until it passed.

Whatever it was, it was over. The end.

Home. With rain pecking at the windows and the entire rest of her life stretching out emptily, in front of her.

Movie star, Ryan O’Gorman arrives unannounced on the island of Innishmahon, hoping to rebuild the relationship with the love of his life Marianne Coltrane. Marianne can’t believe he’s turned up, assuming their troubles are in the past, and though she’s never been happier to see anyone in life, she doesn’t want him to know that …just yet.

“You mean you don’t want me here,” his voice was harsh in his throat. He laid a hand gently on her shoulder. It branded like an iron. She swallowed. She could smell him. He moved closer, his musky sea-scent filled her nostrils. She could not breathe. She ducked under his arm and found sanctuary by the kitchen door. She opened the top half, letting the breeze cool her. He came to stand beside her, following her gaze out past the little windblown garden, the gate to the lane and the sliver of sea beyond. Grey clouds broiled above the Atlantic.

“Marie,” he whispered, “tell me you want me back.” She did not answer. He stayed there, looking out to sea. She stole a glance at him as he watched the horizon, the breeze lifting his hair, thumb prints of tiredness stamped beneath his eyes. He caught her looking at him, and moved to block her view, lifting her chin with a finger, eyes burning into her.

“Well?” he lowered his mouth to hover over hers, she tasted his breath. She stepped back, slamming the top of the door closed.

“Did I do the wrong thing?” he asked again.

“Don’t you love me then?” he spoke quietly.

“Yes, Ryan I do,” she told him, avoiding his eyes.

“Gotcha!” he shouted, making them all jump. “Knew I was still in with a chance, can’t resist me, mad about me, that’s obvious.”

She picked a cushion up and threw it at him.

“Don’t get carried away, boyo, we’ve a lot to discuss, things we should have agreed before now, before this.” She made a gesture encompassing them all.

He gave an involuntary shudder.

“Shower!” She pointed at the door.

He left, attempting a sort of squishy samba, she rolled her eyes as he sashayed up the stairs.

“God loves a trier,” she told Monty, who was waiting patiently for his soup.

August 1973, Monica Sommers, eighteen years old, and Will Ackroyd, twenty one, are on their way to Florence, Italy on Will’s motorbike stopping off to spend a week on the French Riviera:

‘You specifically asked for a double-bed?’ Monica said

‘Ah, bliss.’ Sitting on the side of what looked like a comfortable modern divan, Will undid his boots and kicked them off, then flung himself backwards, bouncing as he landed flat on his back. He closed his yes. ‘No road winding in front of me.’ A few seconds and he sat up looking concerned. ‘I’ll see if we can swop for singles, shall I?’

She turned away to pull open wider the tall window, push back shutters, lean over the wrought iron balustrade, breath in warm Mediterranean scents, wormwood, rosemary and pine. There room overlooked a secluded garden vibrant with scarlet geraniums, magenta bougainvillea, and white jasmine. To her left, an awning shaded a terrace where the hotel guests could sit and eat. Swivelling round, she inspected their room, white walls, white linen, white-matt painted armoire, dressing table, except the white wasn’t white. In early evening the room shimmered shades of pale apricot, its shadows tinged amber.

She looked across at Will. He was watching her, wary. Wet with sweat his curls clung tightly to his head, his face flushed with heat, beads of perspiration glistened on his upper lip. He was beautiful.

‘There’s a small hotel . . . Softly, she sang the opening lines of a song she remembered from one of her father’s old 78’s.

Will’s smile of relief only made him more beautiful. She rushed over, and pushing him backwards, threw herself onto him. He responded to her kiss with such hunger, she was taken by surprise. 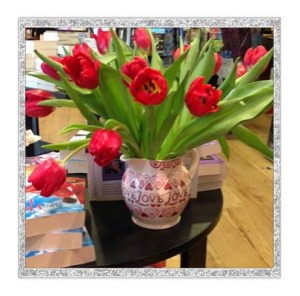 There was a certain something about him; an air, a manner of just being that set him apart from the other men in their Paul Smith suits and two-hundred-pound shoes. It was almost as if, like her, he was here under false pretences. Then she assured herself that it was his clothes – battleship grey linen and silk mix trousers, loose-fitting jacket and white Sea Island cotton shirt – that made him stand out. Nothing more. Except – perhaps – his Byronic good looks. Charlee grimaced. If she was beginning to think in clichés, it was time for her to put down the empty glass and head for the cloakroom.

She was intrigued by him, by his mood switches and sudden change of tack. There was a story here, one the journo in her wanted to investigate. Why, for example, did he have a long, grey cashmere scarf wound loosely around his neck in this overheated room. Affectation? How come his eyes were dark-circled beneath his tropical tan – as though he was recovering from a long illness? Why, despite his obvious youth and vigour did he look world-weary – as though he’d been there, seen it, done it – and had worn out the tee shirt?

‘You walked off without giving me a chance of a rematch,’ he said smoothly, looking over Charlee’s shoulder at the photographs of the exhibition. His warm breath stirred the tendrils of hair on the nape of her neck and a tiny shiver of reaction travelled the length of her body. Charlee put the frisson, and the goose bumps in its wake, down to the fact that the gallery was cooling now that the evening was almost over and the big doors were wide open.

← Oh, My Giddy Aunt!
What Every Reader Wants →