Fifty Shades of Plaid – or why Lizzie loves a kilted hero

I think the element of ‘costume’ removes the hero from the real world and transports both him and the reader into the realm of fantasy. The costumed hero is, generally, aristocratic – and while he does not have to work to earn his daily crust, he often has emotional scars which only the heroine can heal. And, in the case of men in kilts, there is the additional tease of whether or not they’ve gone ‘commando’ , in true Scottish fashion.  So, while I loved the Wicked Lady, Frenchman’s Creek and the Scarlet Pimpernel, my favourite books and movies are Scottish-themed. 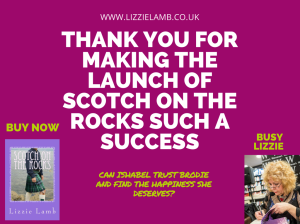 My interest began as a child in Scotland, reared (courtesy of Saturday morning cinema) on the exploits of highlanders featured in such movies as Rob Roy, Bonnie Prince Charlie, The Ghost Goes West (one of my favourites) and -sob- Grey Friar’s Bobby.  After the movie (or fil-um, as we pronounced it) the children in my street would re-enact Rob Roy’s leap and subsequent escape through the waterfall, and the scene from Kidnapped, where Davie Balfour is almost murdered by his evil uncle. Our dogs were dragooned into being “Bobby”, loyally guarding his master’s grave on Grey Friar’s kirk. But they never quite ‘got’ what was required of them and were always wandering off, much to our annoyance.

The girls, of course, loved to act out Flora Macdonald helping Bonnie Prince Charlie to escape over the sea to Skye.

In June we visited Scotland, travelling as far as Skye to see the Fairy Pools and  Flora MacDonald’s grave, amongst other things I wanted to research/double check before publishing for my forthcoming novel SCOTCH ON THE ROCKS.

The written word had its place, too; we knew Young Lochinvar off by heart and would declaim:

He staid not for brake, and he stopp’d not for stone,

He swam the Eske river where ford there was none;

But ere he alighted at Netherby gate,

The bride had consented, the gallant came late.”

I frequently found myself in trouble because I wanted to be Lochinvar, and wouldn’t take my turn as ‘the Fair Ellen.’ Nothing much changed there, then.

Those images and the tales of brave Covenanters and Jacobites stayed with me  as I grew up and read more Scottish themed novels . . . The Jacobite Trilogy by D.K. Broster (falling in love with Ewen Cameron), The Lymond Chronicles (who could resist Francis Crawford?)  and, more recently, the Outlander Series by Diana Gabaldon featuring uber-hero Jamie Fraser. For me, he is the ultimate kilted hero and has it in spades – looks, sense of honour, loyalty, is sex-on-legs and can speak Gaelic. If you’d like to see images of Jamie Fraser, check out my Pinterest board and you’ll see what I mean. I’ll even admit to subscribing to Amazon Prime so I could watch the TV Series: OUTLANDER. For me, a hero wearing a suit, carrying duct tape, rope and plastic ties just doesn’t cut it. Give me an exiled, Jacobite laird every time.

Which brings me full circle to my novels. In Tall, Dark and Kilted my hero is sexy laird Ruairi (Roo-ary) Urquhart who has to fight to safeguard his land and inheritance.

In Scotch on the Rocks I give you kilt-wearing, gorgeous Brodie – an American with auburn hair, who arrives on Eilean na Sgairbh on the back of a storm wind and turns my heroine’s life upside down.

Share with us your favourite ‘hero’, whether in book or film.